The Moss Man, also known as the Peremalfait, is a humanoid cryptid that has been spotted in and around the state of Florida. It is very similar to the famous Sasquatch, but more plant-like.

The Moss Man was first spotted in 1978 by a couple who were enjoying their time on a beach. At first they noticed a human shaped figure in a raincoat lying down by the rocks near the coastline. They did not take much notice of it until it stood up and stared at the couple with its shining red eyes. The couple scrambled to their feet and ran away. Later all that remained was a bit of Spanish moss.

It is described as a tall, humanoid creature covered in green moss or foliage rather than hair. Its eyes are amber in color, and glow in the night, giving it an eerie stare. 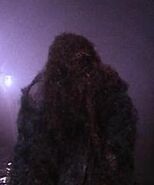 A costume interpretation of the creature