The Nightcrawler, also known as the Fresno Alien, is a mysterious cryptid that has so far made two appearances, both of which took place in Fresno, California. On both sightings, it was only seen in video footage.

The Nightcrawler is best known for being one of the two featured video cases on the second episode of Syfy's Fact or Faked: Paranormal Files.

It appears to be a relatively short creature (approx. 4 feet in height). It is an extremely thin, white humanoid with no discernible arms. It also appears to be wearing a white gown or cloak of some sort. It is thought to be similar to a classic grey alien.

The image from the original video

A statue of the Nightcrawler carved by the Native Americans

A statue of the Nightcrawler carved by the Native Americans 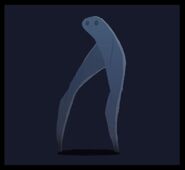