Octosquatch, alternatively known as the Octo-Squatch, was the name given to a strange hairy cephalopod reportedly sighted in the summer of 1961 in Spain. The monster was seen only once, late at night in the summer of 1961, by a truck driver and his anonymous riding partner.

It was described as a “hairy octopus” that was approximately 3-4 feet tall and covered with a shaggy coat of “rust-colored hair.” It had “round glowing eyes” and four “tentacle-like arms". 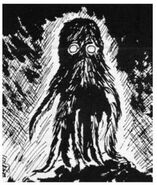