The Old Saybrook Blockheads sighting was an extraterrestrial sighting that took place on December 16, 1957, near Old Saybrook, Connecticut. Retired teacher Mrs. Mary M. Starr reported that a bright light awoke her around two to three in the morning. Peering out her bedroom window, she thought at first that she was looking at a downed airplane until she realized that the object was hovering above her clothesline. (bogleech.com)

Through the craft's large, square windows she witnessed two strange entities pass by one another with their right arms in the air. Their featureless appendages had no hands, their "heads" were transparent cubes with bright red cores and their rubbery bodies flared out like skirts. She could not see if they had any legs, but guessed that they were less than four feet tall. (bogleech.com) 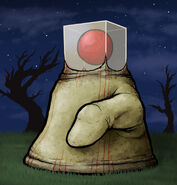