Start a Wiki
The Paciencia Abductors sighting is a extraterrestrial sighting and abduction case that took place on September 15, 1977, in the town of Paciencia, Brazil. The witness was a 33-year-old bus driver named Antonio La Rubia.

Antonio encountered a huge object, which he estimated to be 70 meters (235 feet) across, sitting in a field near his home. He decided to retreat, but was unable to do so, for at the moment he started to run, an intensely bright light lit up the area, and he was unable to move. At that moment Antonio saw three "robots" positioned near him, and he was captured and taken into the disc. (ufoevidence.org)

At that moment Antonio saw three "robots" positioned near him. They were one meter, 40 centimeters (about four feet) tall, but their antennae, which jutted out of the middle (tops) of their heads extended far enough to extend beyond his height (which is approximately five feet, five inches). The heads of the creatures were shaped like American footballs, with a band extending across the middle, horizontally, which looked like a row of small mirrors of a blue shade, one a little darker than the others.

The bodies, Antonio said, were stocky, the trunk broader than his own (he is muscular, but of slender build). They had appendages for arms which he compared to elephants' trunks, and which narrowed down to pointed tips, resembling one finger. Their bodies were made of a rough substance resembling scales. Antonio, when questioned, said he didn't think the scales were "armor", for the robots moved around freely and the "scales" did not seem to impede them in any way. The trunks were rounded at the bottom ending in a single leg. Antonio's first impression was that they were sitting on something, but didn't feel this was the case. This leg ended in a "platform" the size and shape of a saucer. Antonio compared this leg and "platform" to the stools utilized on ships. All of this outer part of the bodies looked like a dull shade of aluminum. (Source: APRO Bulletin, Vol. 26 No. 4, Oct. 1977) 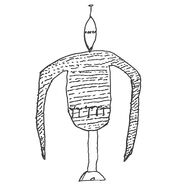 An eyewitness sketch by Antonio
Add a photo to this gallery
Retrieved from "https://obscurban-legend.fandom.com/wiki/Paciencia_Abductors?oldid=4841"
Community content is available under CC-BY-SA unless otherwise noted.