The Pancake Bakers from Space sighting was a bizarre extraterrestrial sighting that took place at 11:00 AM on April 18, 1961 near Eagle River, Wisconsin. The witness was a 68-year-old farmer named Joe Simonton.

Joe witnessed a humanoid emerge from a silver craft of some sort, while several others could be seen within the ship. They didn't speak any English and all communication took place in the form of hand gestures. However, Simonton did subliminally receive some sort of telepathic message to fill a jug with some water for the creatures.

When Joe returned with the jug of water, he found the men cooking what appeared to be pancakes on a flameless grill of some sort. In exchange for the water, the entities gave Joe four of the pancakes.

The visitors were described as being approximately three-feet in height and humanoid. They were also described as "nonthreatening". Each of the "pancakes" was about three inches in diameter and filled with small holes like a cracker. 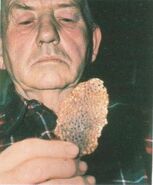 A photo of Simonton and one of the pancakes
Community content is available under CC-BY-SA unless otherwise noted.
Advertisement