The Pendeli Egg sighting was an extraterrestrial sighting that took place during the April of 1977 near Penteli, Attica, Greece. The witnesses, a Mr. and Mrs. "L.X." and a Miss "M.V.", were out hiking on Mt. Pendeli when they came across a pristine car parked where it couldn't have gotten to. Initially, the trio left it where it was, assuming whoever put it there would eventually retrieve it, but upon subsequent hikes they noticed the car never left its spot. They finally climbed up to where the car was to inspect it, finding nothing unusual about the car itself but discovering strange tracks in the snow. The tracks were oval, and some were in nearly vertical surfaces where neither man nor beast could step.

At some point Miss M.V. had gone off on her own, and soon found herself face to face with "a white creature, a dreadful white creature." It was about 2 feet tall, oval, and lacked any features save a pair of large, luminous eyes. 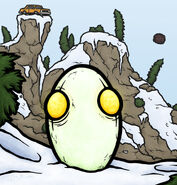