The Phantom Whistler of Louisiana is an invisible entity that was reported by an 18-year-old woman named Jacqueline Cadow, as well as her mother.

No one ever managed to catch a glimpse of the being. He would hide in the bushes outside her house at night and wolf-whistle similar to cat-calling construction workers.. Sometimes he would follow this with a "blood-curdling moan."

There are no notable encounters that we could find, other than Jacqueline's. 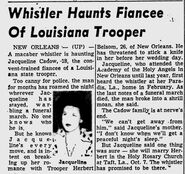 A newspaper article about the entity
Community content is available under CC-BY-SA unless otherwise noted.
Advertisement