The Pig Lady is a horrific mutant entity that has been sighted on the aptly-named "Pig Lady Road" in Hillsborough, Somerset County.

Now, the Pig Lady was supposed to be an old maid who was injured during a fire at the mansion. A fire broke out, and this woman was on the second floor and was abandoned by everyone else as they saved themselves. She fell from the second floor, disfiguring her face, and she disappeared to live in the woods. However, there are many different origin stories for the Pig Lady.

The Pig Lady has been described as resembling a humanoid creature with a horribly deformed, pig-like face.

The story goes that in the early 1900’s when Hillsborough was all farms and vast woods there lived a lady who resembled a pig. She lived on a farm secluded from civilization because as a child she was picked on and teased constantly, so she vowed never to have to deal with that kind of torture ever again. One day as she was gardening, a young boy came along with two of his friends and noticed the Pig Lady gardening. The boys made jokes about her hideous pig face and vowed to go back later that night, and place a slaughtered pig head on her door step. They went that night and were never heard from again. Years later as Hillsborough grew in population, the missing teenagers’ bones were found where her garden once was.

Legend has it that in order for her to come out, you must annoy her by flashing your lights, screaming Pig Lady, and beeping the horn. Then you must leave someone from the group on the street, and drive off without looking back. Once you get to the end of the road you turn around and go back and see what your friend has witnessed. The whole drive from leaving your friend and coming back takes ten minutes.

We all admitted to being scared except for my friend Jenn. She was calling us stupid for being scared and taunted the Pig Lady when she got out of the car. We did the routine and sped off. We arrived back and laughing at how scared we all were, except there was no Jenn. We thought she was playing a joke, so we got out of the car. My friend Shannon heard crying from a nearby bush. My friend John carried Jenn out and we got into the car in silence. After leaving the deserted road we stopped to get gas. Jenn was still crying and I turned to comfort her – that’s when I noticed the scratches on her face, arms, and legs.

We dropped her off and she never spoke to us again. She moved one year later. (account taken from Weird N.J.) 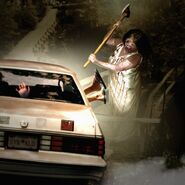 A dramatization appearing in Weird N.J.
Community content is available under CC-BY-SA unless otherwise noted.
Advertisement