The Prospect Monoliths sighting was an extraterrestrial sighting that took place on January 27, 1977, near Prospect, Kentucky. Driving home one night at one in the morning, 19 year old Lee Parish spotted a rectangular object hovering in the sky. Suddenly, his radio failed and he felt unable to control his vehicle. He arrived home with sore and bloodshot eyes, unable to account for more than a half hour of time. (bogleech.com)

Under hypnosis, he vividly described being transported from his driver's seat into a huge, round room containing three strange creatures or machines. One towering figure was at least twenty feet tall, resembling a rough black "tombstone" with a single, pointed arm. Another, fatter being was six feet tall and pure white, with two unmoving arms and a wedge-like head. Lee got the impression that the white being was the "leader," and it constantly emitted odd sounds like teeth being brushed. The third, smallest being was red and rectangular, and Lee sensed that this being was afraid of him as it approached and touched his head. He felt a cold, stinging sensation and later believed he had been analyzed in some way. (bogleech.com) 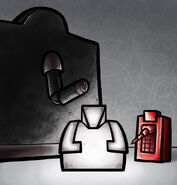