Pupa the Doll is an allegedly haunted doll originally owned by a small girl in Italy who lived around the 1920s up until 2005. The se[?], but the exact location has been kept a secret.

Pupa is very similar to Robert the Doll

Pupa (Latin for 'doll') was made for a little girl in Italy in the 1920s, and who owned her right up until her death in 2005. The little girl who owned Pupa often stated that her doll was 'alive' and had a will of its own. She stated that she and Pupa would talk often throughout the years, that Pupa held all of her secrets and was a help in hard times – even going so far as to have saved her life.

Pupa and her owner traveled quite extensively throughout Europe and the United States. At the end of World War II the little girl’s grandmother passed away, so as a memento and a way to remember her, a button from her grandmother’s clothes was sewn onto Pupa’s dress. (theparanormalguide.com) 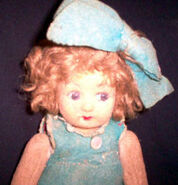 A photo of Pupa 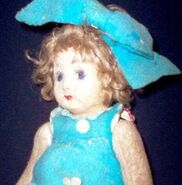 A photo of Pupa
Community content is available under CC-BY-SA unless otherwise noted.
Advertisement