The Ririe Carjackers sighting was an extraterrestrial sighting that took place on November 2, 1967, near Ririe, Idaho. The two witnesses, Will Begay and Guy Tossie, were driving home after a night of drinking when their path was blocked by a flying saucer.

The dome of the saucer opened and one of its occupants floated down and entered the car, taking the driver's seat. The invader proceeded to drive the car a short distance into a field and stopped. Tossie took the opportunity to get out of the car and headed for the closest building for help, and was followed by a green light, while Begay remained in the car. The alien driver, meanwhile, started chattering incomprehensibly, sounding "like a woman or bird." Shortly afterward it returned with its companion into the saucer, which flew away into the night sky, propelled by a yellow light.

The saucer was coated in orange and green lights, and topped by a clear dome, inside which sat two small beings with skin rough and scarred "like a cantaloupe." 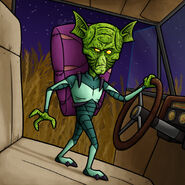