The Sea Monk, also known as the Sea Bishop or the Bishop-fish, was the name given to a sea animal found off the eastern coast of the Danish island of Zealand in 1546.

It was mentioned and pictured in the fourth volume of Conrad Gesner's famous Historia Animalium. Gesner also referenced a similar monster found in the Firth of Forth, according to Boethius, and a sighting off the coast of Poland in 1531.

It was described as a human-sized "fish" that looked superficially like a monk. 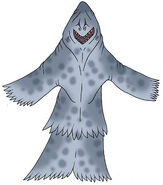