The Sewer Blob, also known as the Cameron Village Sewer Blob, was a blob-like cryptid caught on film in the sewer pipes beneath Cameron Village in Raleigh, North Carolina, in April of 2009. The South Carolina-based Malphrus Construction was contracted to send a surveillance camera for the purpose of this mission was to check the infrastructure of the sewer lines.

The blob-like cryptid appears to be a large bulbous blob that sticks to the wall. It is brownish-red in color and is covered in wrinkles, bumps, and a wet, slimy exterior. 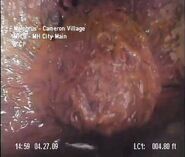 A photograph of the blob