A Shadow Person (also known as a Shadow Figure, Shadow Being, or Black Mass) is the perception of a patch of shadow as a living, humanoid figure, particularly as interpreted by believers in the paranormal or supernatural as the presence of a spirit or other entity. According to believers, they are seen flickering on walls and ceilings in the viewer's peripheral vision.

The shadow people are very similar to the Black Stickmen.

Shadow People are described as being completely black humanoid creatures made of pure shadows. They are often reported moving with quick, jerky movements, and quickly disintegrate into walls or mirrors. They are believed to be evil and aggressive in nature, although a few people consider them to be a form of guardian angel.

When I was younger, there was a "man" at the top of my stairs. I used to go to the bathroom every night between about 12 and 3 and he would always be there! He was a shadow on a mirror. I was only about four or five, but other people saw him, too. He even tried to push one of them down the stairs! Since moving into the house across the road, though, I haven't seen or heard from him. I can't go in my old house upstairs, because there's a very unwelcome and hostile feeling to it. I still can't work out who he is. I've also seen him in my friends' houses, and he just stands there... looking at me, although there's no face, just a shadow. [sic] -Lauren, Paranormal.about.com

I'm in my teens and from New Zealand. Half a year ago, I would lie on my bed and casually surf the net. From the corner of my eye I would see a dark mass on top of my wardrobe facing towards me. But when I finally turned to it, it shrank to nothing - quite fast. At night the black mass would be by my bedside or at the doorway. I would hide under the covers and curl up in a ball. I just wanted to cry for help. [sic] -Amie, Paranormal.about.com

Hey guys, I probably posted this story on here many years ago (decade or more) but can't be sure. Okay, so a heap of weird shit had gone down in the home our rather large family of eleven individuals resided in. The shadow man with the hat and coat is the one I'll share here. Mainly because in 1999-2000, I decided to see if I could find out anything about this entity and came across an almost identical drawing to what I saw on a semi-regular basis as a little kid. This particular night, the hat endowed shadow appeared outside the bedroom window and was suddenly inside, in our bedroom. My sister and I had beds that ran parallel, with the foot ends facing the window. I spot the shadow man and see he is moving but not actually walking closer towards me. My little sister yells out, "don't let him get you". I quickly roll on my tummy (I was seven, Cate was six IIRC) but as I'm looking at him, I see he has something in his hand. I hide my face and feel three distinct prods on my left shoulder blade. I saw this entity probably a half dozen times in that room but there was a heap of other weird crap that went on there as well. So, any of you lovely lot ever experienced anything like this? A lot of people would just say it was a simple hypnogogic experience, which I would've probably have dismissed it as such once I became familiar with the term but for the fact that my little sister saw him and yelled out. [sic] -LauraRoslin, forum.forteantimes.com

An artist's interpretation of the "Hat Man" variation 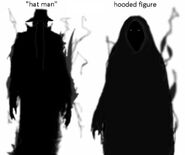 Artistic depictions of the Hatman and Cloaked Figure varieties

An alleged photo
Community content is available under CC-BY-SA unless otherwise noted.
Advertisement