Sheepsquatch is a monstrous cryptid that has been reportedly sighted in the Boone, Kanawha, Putnam and Mason counties of West Virginia, with a surge in sightings taking place in Boone County during the mid-1990s.

Sheepsquatch is described as being a quadruped about the size of a bear, with entirely white, wool-like fur. It reportedly has a long and pointed head, similar to a dog but with long, saber-like teeth and a single set of horns not unlike those found on a young goat. Its forelimbs end in paw-like hands, while its tail is long and hairless. It is reputed to smell like sulfur and may be due to a musk scent gland similar to those found in many species in the order Carnivora such as weasels and skunks. 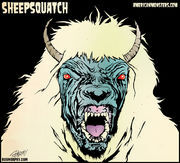 A recreation of the Sheepsquatch