The Smiling Stones are a series of strange carved stones found in central Massachusetts that are baffling researchers. So far, 4-5 of these granite stones have been found.

The stones have been described as being made of granite and ranging from 6-25 pounds. They all possess odd smiley faces with deep sunken eyes and wide grinning mouths. These faces do not appear to have been carved by hand, but rather chipped away by other stones. 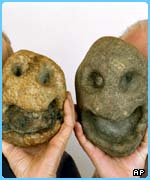 A photo of the stones
Community content is available under CC-BY-SA unless otherwise noted.
Advertisement