The Spiny-backed Chimpanzee is a bizarre creature reported from the Democratic Republic of Congo. It is described in a short account that appeared in Philippe Coudray's self-illustrated book Guide des Animaux Cachés (2009).

According to Coudray, a member of a unit from the United States Navy who wishes to remain anonymous has claimed that during a mission to the Democratic Congo sometime between 1997 and 2002, the unit's team encountered 13 bipedal chimpanzee-like animals that were attempting to kill another animal.

Standing 4.5-5 feet high, the creature were uniformly gray in color, but by far their most distinctive feature was the series of spines running down each chimp's back, which stood up like porcupine quills whenever the chimps became agitated. 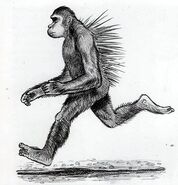 Courdray's sketch of the creature
Community content is available under CC-BY-SA unless otherwise noted.
Advertisement