The Silver Man sighting was an extraterrestrial sighting that took place at approximately 11:30 PM on the evening of March 17th, 1978.

A 39-year-old service engineer by the name of Ken Edwards was making the 15-mile journey home to Warrington New Town development following a union meeting in Greater Manchester. Edwards claimed that he first spied what he thought was a “man climbing,” but he quickly realized that he was looking at a gargantuan, humanoid figure lumbering down the steep embankment adjacent to the nuclear facility. The startled engineer immediately hit the brakes and his van slowed to a halt near the curb of the road some 50-feet away from the hulking humanoid, which was now illuminated by his headlights. (mysteriousuniverse.org)

The anxious engineer estimated that the figure was at least 7-feet in height and was either clad in some sort of reflective silver fabric akin to a radiation suit or had a dull metallic epidermis. He also claimed that the figure’s roundish face was black, or that it was covered with some sort of mask, with no discernible features except for a pair of glowing eyes. Furthermore, it had two, thin arms that were not attached at its shoulders, but stuck straight out of its chest like a Tyrannosaurus Rex. Edwards also noticed that this creature assumed an odd “stooped” posture as it scrambled down the hill, which seemed impossible for a human to emulate without toppling over. (mysteriousuniverse.org) 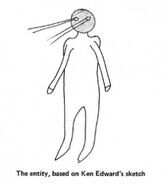