The Tick Canyon Giant Rabbit was a large, unknown, rabbit-like animal that was sighted by a geologist named Dr. Stephen P. Albert of Los Angeles in March of 1969 while mapping rocks in Tick Canyon.

The creature was described as being 3-5 feet tall and weighing approximately 150-175 pounds. It has been described as having a kangaroo-like body, but with a distinct cottontail like that of many rabbits, no kangaroo pouch, and very long ears. 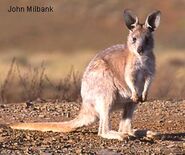 A photo of a wallaroo
Community content is available under CC-BY-SA unless otherwise noted.
Advertisement