The Toronto Tunnel Monster was a strange humanoid cryptid reportedly sighted by a man named Ernest (last name kept private) in a dark tunnel underneath Toronto, Canada, in August of 1978.

He and his wife of 19 years had been raising a litter of kittens. One of the kittens apparently disappeared and Ernest decided to search for it in the vicinity of their Parliament St. apartment. He stumbled upon the opening to a nearby dark tunnel and crawled approximately 10 feet inwards, where he encountered the creature.

Ernest spoke reluctantly with reporters as to what occurred next. The creature spoke to him. “I’ll never forget it,” he said. “It said, ‘Go away, go away,’ in a hissing voice. Then it took off down a long tunnel off to the side. I got out of there as fast as I could. I was shaking with fear.”

Ernest described the monster as “long and thin, almost like a monkey, three ft long, large teeth, weighing maybe 30lbs with slate-grey fur.” However it was the eyes that truly stood out, “orange and red, slanted.”

There are no notable encounters that we could find, other than Ernest's.

A sketch of the creature 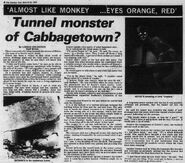 A newspaper headline about the sighting
Community content is available under CC-BY-SA unless otherwise noted.
Advertisement