The Tripod Creature sighting was a bizarre extraterrestrial sighting that occurred on August 15, 2009 at 2:45 AM in Philadelphia, Pennsylvania. The anonymous witness claimed to have first seen a 4-foot, round, luminescent orb on the roof of the building that he worked in.

"It had a beautiful baby blue eye which was moving rapidly, just one, a long eye lid and rubbery looking legs with bulbous feet. I could see it was starting to panic because it started stomping his feet like a mad skunk or jumping up and down and making a high pitch squeaking sound almost like a cats toy." (mysteriousuniverse.org) 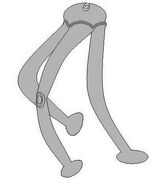 An eyewitness drawing
Community content is available under CC-BY-SA unless otherwise noted.
Advertisement