The Tumor Seal was a fetal seal-like cryptid reportedly discovered by a guest on the radio show Coast to Coast AM named "Mel Waters". Waters claimed to have discovered a bottomless pit on his property, which he dubbed "the Devil's Hole".

To test the depth of the hole, he and some friends placed a sheep into a crate and lowered it steadily into the hole. Waters confirmed that the beast began thrashing violently in its crate and making sounds that can only be compared to shrieks of terror. The crate was purportedly lowered to a depth of approximately 1,500-feet, at which point the sheep’s undulations and screams were silenced. That was when the metallic rim of the hole suddenly began to vibrate. (mysteriousuniverse.org)

When the crate was pulled up, the sheep was dead, appearing to have been cooked from the inside. Upon cutting the sheep open for an autopsy, Waters and the men discovered a gelatinous, tumor-like glob where the sheep’s internal organs should have been.

Some of the Basque men noticed that the tumor seemed to be moving of its own accord, as if something was pushing out from within. Waters decided that the tumor needed to be cut open, and one intrepid fellow did the deed, releasing a creature that Waters described as looking like a “fetal seal” connected to the tumor inside the sheep with an umbilical cord.

Waters went on to claim that this strange tumor seal had haunting human-like eyes, which it locked onto the experimenters. This as yet unclassified creature from the abyss and its surface hosts stared at each other in stunned silence for the better part of two hours before this sheep born abomination apparently “nodded” at its would-be captors and dove back into the hole. The men swiftly regained their composure and hurtled the tarp wrapped tumor and carcass into the depths with it. (mysteriousuniverse.org) 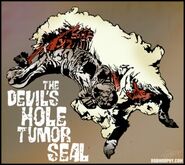