The Van Meter Visitor sighting was a terrifying alien sighting that took place over the course of several nights in the fall of 1903.

On the first night it was first spotted flying across the building tops. The next evening it was spotted by both the town doctor and bank cashier Peter Dunn who took a plaster cast of its 'great three-toed tracks.'

On the third night, a man spotted it perched atop a telephone pole. Another resident who saw it, described the monster as hopping like a kangaroo, while the local high school teacher likened it to a devil.

Scared and angered by what they had witnessed, the townsfolk followed the creature to an abandoned coal mine near an old brickyard where they heard a noise from the mine. (dailymail.co.uk)

The entity was described as a tall humanoid creature that resembled a half-human/half-bat monster. It possessed large bat-like wings and a glowing light emanating from its horn.

The creature is described as moving at speeds the townsfolk had never witnessed before, plus it let off a powerful stench and shot a blinding light from its horned head.

A sketch of the entity 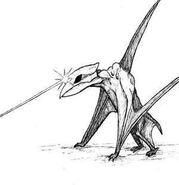