The Villa Santina Aliens sighting was an extraterrestrial sighting that took place on August 14, 1947 near the Chiarso creek, at Villa Santina in Italy. While painting, he noticed a 30 ft. disc-shaped object that had alighted some little distance from him.

With his paint brushes still in his hand, the artist hailed the creatures. It is possible that this was interpreted as a hostile gesture, for one of the beings touched the centre of its belt and projected a thin vapour which caused the artist to fall dazed onto his back. The creatures then approached to within two yards of the prostrate artist and stood examining his easel. Although weak, the artist contrived to roll over, and saw the beings pick up the easel which had been knocked down; he perceived that it was taller than both of them. He also noticed that they were panting heavily. They then returned to the disc-shaped object and entered it, whereupon it rose from the ground, hovered and, according to the account, disappeared. (noufors.com)

The artist said that they were about 3 feet tall, and were wearing dark blue coveralls with a bright red collar and belt. They also wore spherical helmets on heads that seemed larger than normal, but their faces were not covered. Their faces had a greenish color, their eyes were large and plum colored with a vertical line in the center, and they had no eyelashes or eyebrows. Each had a straight and rather large nose. Their hands were claw-like, greenish in color, and with eight fingers on each, four opposed to four in the same way that our thumbs are opposed to our fingers. 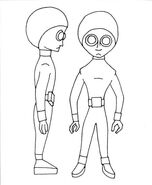 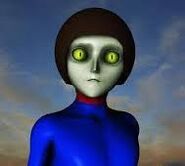 An artist's depiction
Add a photo to this gallery
Retrieved from "https://obscurban-legend.fandom.com/wiki/Villa_Santina_Aliens?oldid=5925"
Community content is available under CC-BY-SA unless otherwise noted.