Vincent Hitchcock the Doll, alternatively known simply as Vincent Hitchcock, is a purportedly haunted clown doll owned by Renee (last name has been kept anonymous). Renee, a real estate agent from Oregon, first saw the doll in an online auction and purchased the item for $500.

Vincent is similar to Robert the Doll and Annabelle the Doll.

Not much is known about Vincent's history. Renee claims to have looked into the history of the doll before with no real luck.

There are no notable accounts that we can find. 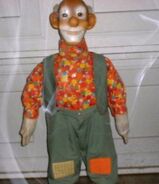 Me and Vincent the Haunted Clown Dolls 2011
Community content is available under CC-BY-SA unless otherwise noted.
Advertisement