The Voronezh Aliens sighting was a bizarre extraterrestrial sighting that took place on the evening of September 27, 1989, at about 6:30 PM.

According to eyewitness accounts, a hatch on the underside of the still hovering craft opened to reveal an odd, long armed, neck-less, thick-set, 9-foot tall entity with a small, knob-like head. The creature was clad in a silver jumpsuit with bronze boots and was so large it appeared to fill the hatch opening. As if the creature’s immensity wasn’t disturbing enough, eyewitnesses claimed that there were three luminous eyes wedged into its tiny, dome-like head. The being’s two outer eyes were whitish and the center eye — which was set slightly above the other two — was bright red and “swiveling around like a radar.” They also claimed that the alien had a disk-like object attached to its chest. This bizarre being seemed to methodically scan the terrain below, then sealed the hatch. Then the UFO made its descent. Eyewitnesses stated that the object’s weight was so substantial that it permanently bent to the side a standing poplar tree that was near the craft.

The object then hovered about 5-feet off the ground and extended four leg-like supports and landed softly on the grass. At this point, the alien that was seen through the open hatch now emerged from the ship followed by two equally colossal creatures that shared the same three eyed visages. These extraordinary entities walked with a “heavy gait” and were followed by what witnesses described as a box-like robot, with push buttons on its front side. An alien adjusted one of the controls on the robot’s chest, enabling it to walk about in a “mechanical” fashion. The entities then began to examine the ground near where their craft had landed and proceeded to take some soil samples. One of the creatures made indecipherable sounds, which some eyewitnesses perceived to be orders. Then a beam of light emerged from the “chief” alien’s chest. The beam delineated a number of luminous triangles and rectangles — about 1-foot by half a foot wide — as if indicating something to its comrades. This frightened one young man so much he apparently cried out in alarm. At the sound the lead alien apparently fixed its gaze on the youngster, freezing him unnaturally in his tracks. 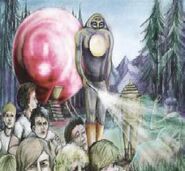