The Zanfretta's Aliens sighting was a bizarre extraterrestrial sighting that took place on the evening of December 6, 1978, at about 6:30 PM. The witness was a 26-year old night watchman named Pier Zanfretta.

According to Zanfretta’s report, he was negotiating the dangerously icy roads in his patrol car, en route to the currently unoccupied country home of a client, Dr. Ettore Righi, when the engine, radio, and lights of his vehicle all inexplicably died. It was at that moment that Zanfretta claimed to have seen four lights moving around in the garden of the Righi house. Assuming that the strange beams were emanating from the flashlights of would-be thieves, Zanfretta quietly climbed out of his car with his revolver and flashlight at the ready. The security guard silently slipped through the open gate and crept along a rock wall in an effort to get the jump on what he still assumed were ordinary burglars. Just as he was preparing to leap out to confront these trespassers, Zanfretta felt something touch his shoulder from behind. He spun around, revolver in hand, but instead of finding an average human criminal illuminated by his flashlight’s harsh glare, he saw a large extraterrestrial entity.

It is very similar to the Voronezh Aliens sighting.

Zanfretta himself described the entity/entities as being: “An enormous green, ugly and frightful creature, with undulating skin… as though he were very fat or dressed in a loose, gray tunic… no less than 10-feet tall.”

In later interviews, Zanfretta would include more detailed descriptions of these beings including such features as hairy, greenish skin, points on the sides of their faces, rounded fingertips, monstrous, yellow triangular eyes and red veins across the forehead. Zanfretta also described a unique mechanical apparatus that fit over their mouths, which enabled them to breath in Earth’s oxygen rich atmosphere. 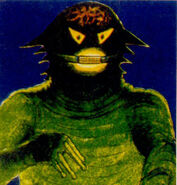 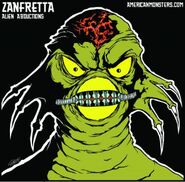